“The other, the same” 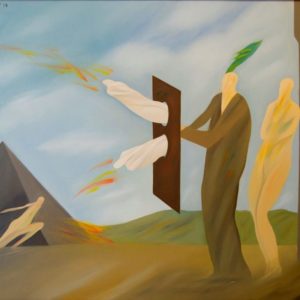 Chilean painter, born in Santiago de Chile in 1935. Having only completed one year at the Santiago School of Fine Arts in 1953, his artistic training took place at Taller 99, where he learned the technique of hand engraving with the master Nemesio Antúnez. In 1961, he was awarded the Pan-American Union scholarship, thanks to which he continued his training at New York’s Pratt Graphic Art Center.

Influenced by the work of Modigliani, Roberto Matta and Enrique Zañartu, he produces works with an abstract language and high symbolic content. At times, his aesthetic deliberately seeks to allude to the artists who had a great influence on him. In his work, he also makes reference to contemporary literature, as we see in this artwork “El otro, el mismo”, an allusion to the collection of texts and poems that Jorge Luis Borges himself produced and which was published in 1964.

In his paintings, the artist shows his unique vision of life and art. This vision was to evolve throughout his career, as did the themes represented. In the first stage, he starts with abstraction, later heading towards figurative art with indefinite anthropomorphic forms, seeking to reflect the mysticism of man.

His introspective and reflexive attitude formally translates into complex and changing paintings, in which several dimensions and scenes appear to coexist simultaneously, which together with the mystical thematic and the interior of the human being make it fit within Surrealism.

From the 1980s, he started to create work that reflects the condition of contemporary man, continuously faced with his pain and loneliness, with colour becoming more intense and forms that start to decay once again into the landscape.

The creator of a body of work rich in styles and themes, and at the forefront of his country’s pictorial avant-garde since the 1950s, he is also one of the most internationally recognised contemporary Chilean artists.