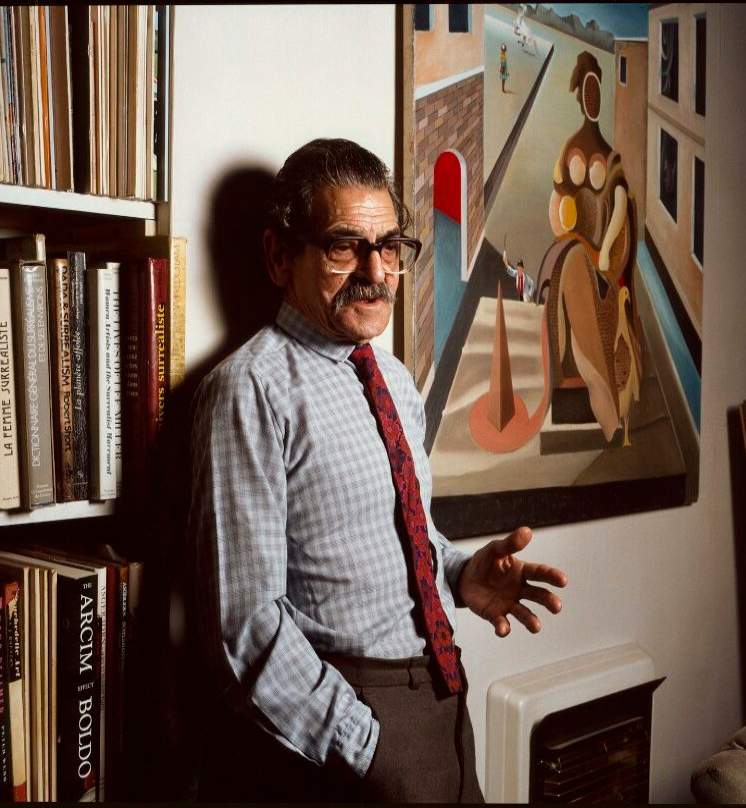 Conroy Maddox was born in Ledbury, in the English county of Herefordshire, in 1912. He was one of the most important members of Birmingham’s Surrealist movement, along with the brothers John and Robert Melville. This group was characterised by its opposition to the type of Surrealism that was practised in England; they considered it to be mired in the artistic conventions of the past, so felt a stronger connection to the movement originating in France.

Maddox discovered Surrealism through a book by the art critic R. Wilenski and found his inspiration in the work of Dalí, Max Ernst and Óscar Domínguez.

The International Surrealist Exhibition was held in London in 1936, introducing Surrealism to the English public and media for the first time. At the request of Ronald Penrose, one of the exhibition organisers, Maddox and the Melvilles attended, despite their reluctance, considering that the London exhibition did not comply with Surrealist principles. However, the visit gave them the opportunity to meet prominent figures of the movement, such as André Breton, Max Ernst and Salvador Dalí.

From then on, Maddox played an important role in building relationships with the European Surrealists. He travelled many times to Paris between 1936 and 1939, attending meetings at Le Dôme Café and the Académie de la Grande Chaumière, and establishing lasting friendships with Man Ray and Georges Hugnet. These contacts led to improved communication between Surrealists in Birmingham, London and Europe. In 1939, Maddox’s work was exhibited at the Guggenheim Jeune Gallery alongside that of Breton, Georges Braque, Wassily Kandinsky, René Magritte and Marcel Duchamp.

After World War II he moved to Balsall Heath, where he began his most active period. There he bought and designed a house which would be the focus of Surrealist activity. Eccentric parties and meetings were held there, and the home’s bizarre decoration, dreamed up by Maddox, included many photographs of the painter with the recurring theme of a nun in an inappropriate pose, a giant loom, mandolins, and wallpaper printed by hand using a converted washing press.

By the late 1940s, English Surrealism was a spent force. The group went into decline and dissolved during the fifties. In 1955, in a last-ditch attempt to revitalise English Surrealism, Maddox moved to London to continue his advocacy and private support for the cause. In 1978 he made contact with the Surrealist current that was emerging on the west coast of the United States, and artists from that movement visited London to exhibit at Maddox’s Surrealism Unlimited exhibition.

From the beginning, his work sought to challenge conventions and break with stereotypes of reality, trying to express what is produced at the limits of our consciousness.

Like other members of the group, he saw something more than a pictorial style in this new artistic current, trying to bring his aesthetic, political and disruptive influence to society as a whole. From then on, he developed an unbreakable bond with the Surrealist cause: he rejected academic norms in search of new techniques that would express the Surrealist spirit of rebellion and devoted most of his life to exploring its potential through his paintings, collages, photographs, objects and texts.

The decontextualised settings, the references to the classical world based on figures, whilst denying any traditional concept of naturalistic representation, altering proportions… They all respond to an aesthetic somewhere between the photographic language of Man Ray and the highly refined language of Salvador Dalí or René Magritte.