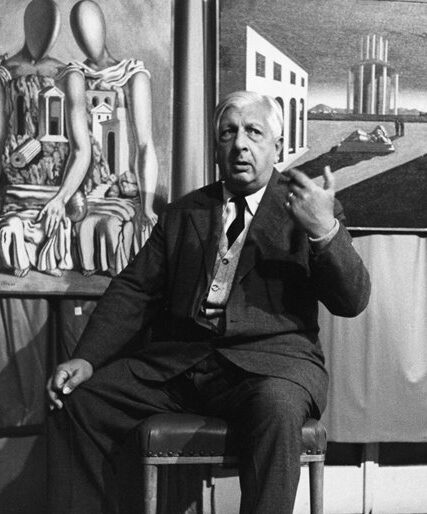 Giorgio de Chirico, of Italian descent, was born in Volos (Greece) in 1888. He began his drawing studies at a very young age at the National Technical University of Athens, after which he continued his studies at the Academy of Fine Arts, Munich between 1906 and 1908. He was also to study philosophers like Nietzsche and Schopenhauer there, who had a marked influence on his theoretical concepts in art.

He moved to Paris between 1911 and 1915 where he would work and exhibit in various salons and befriend avant-garde artists like Paul Valéry and Guillaume Apollinaire. However, his search for what was later named metaphysical painting (a term coined by his friend Apollinaire) was to distance him from the avant-garde currents that emerged among his contemporaries.

When World War I broke out, he was assigned to a military hospital in Ferrara, where he met Carlo Carra and Filippo de Pisis. Along with the former, de Chirico was later to declare the postulates of metaphysical painting. After the war he settled in Rome, where he took part in the Valori Plastici exhibitions. He held his first solo exhibition in 1919.

From the 1920s onwards he incorporated classical techniques and languages in his work through the use of glazes and tempera, charging his pieces with a mysterious and nostalgic atmosphere. In 1926, now back in Paris, he joined the Novecento movement which was opposed to modernism. He eventually abandoned this movement due to his own particularities and vision.

His work focuses on representing architectural elements with references to the classical world, mainly empty spaces in which the human presence is reduced to a minimum or, perhaps, even to shadows. The spaces that we see represented in them are timeless, mysterious, lonely and strange. These characteristic and paradigmatic scenarios of the artist within metaphysical painting share prominence within his production with his use of mannequins. Dehumanised, faceless figures with disproportionate shapes, which de Chirico employs allegorically to represent the whole of society, based on the futurists’ concept of the automat.

After an initial stage in which exterior spaces inspired by Mediterranean cities predominated (between 1909 and 1914), Giorgio de Chirico introduces interiors in his works, occupied and sometimes invaded by his mannequins, who occupy the whole space. The classic perspective and the vanishing point are maintained through the use of windows or open spaces that take us back to the outside.

In his works he also concentrates on themes such as breaking down the human being, the representation of a painting within a painting, and discovering impossible objects. These concepts would serve as inspiration for surrealist painters alongside the theme of dreams and imagination, also present in Chirico’s work.

This artist’s influence on the young surrealists is evident, and they themselves acknowledged this. He is also important for artists who later followed the precepts of surrealism and metaphysical painting in one way or another, as well as for the development of New Objectivity and German Magical Realism. This was so much the case that even the surrealists invited him to participate in the movement that had been created by Breton. He held exhibitions with them, but left the group in order to follow his own path away from contemporary avant-garde movements.