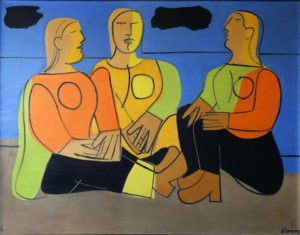 Women as a constant

Luis Seoane resorts to female representation as a constant in his work, be it to refer to the social situation in post-war Galicia, through their robust bodies and sharp features; as an allegory of the mother-earth, the “Mater Galleciae”; or in works where the artist’s focus is on experimentation and plastic and formal development.

With his portrayal of these figures, Seoane communicates a message from a society (repressed, impoverished, postwar), a culture (Galician) and a language (his own contemporary artistic language).

In this piece of work the artist represents static figures who appear to be waiting, standing next to the sea. Three robust women, with large hands and broad shoulders, are engrossed in conversation on the seashore. Two of them are depicted in profile while the third seems to be staring at the observer. The way they are represented is seen very frequently in Seoane’s work: they are a symbol of all those people who waited, and some of whom are still waiting, to see the return of their relatives who had to emigrate or went to war.

Simplification as a language

We can see the simplification of forms in his language, combined with the use of a reduced colour palette and pure colours. He composes figures and spaces based on flat coloured marks and makes use of black in the form of lines to delimit certain volumes. The flat figures stand out against an intense blue and ochre background that is also flat. Three stripes in just two colours divide the space into land, sea and sky. The scene dispenses with any anecdote or decorative element; it goes straight to the essence of form, colour and message.

This is a piece of work from his late stage in which lyricism and compositional harmony dominate the scene, leaving aside his more abstract and expressionist side.