“The creation of the world according to the Mapuche mythology” 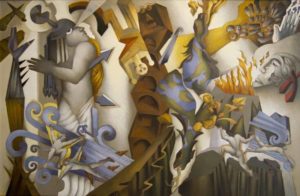 Mario Toral was born on the 12th February 1934 in Santiago de Chile. He completed his art studies at the Fine Arts School of Uruguay and Henri Adam’s Workshop in Paris. He is a member of the Fine Arts Academy of the Institute of Chile and has received many acknowledgements during his fruitful career.

The great variety of techniques used, from paint, photography, engravings, illustrations to the completion of documentaries are the highlights of his work.

The work of art “A Visual Memory of a Nation” emerges from within a large project called MetroArte, which intends to bring art closer to the citizen. This mural by Mario Toral is located in the University of Chile metro station, right in the city centre. It covers 1,200 m2 and has six panels in total, where the artist distinguishes between Past and Present. Each of these parts includes three panels with different scenes alluding to the history and the collective imagination of the moment.

Toral seeks to recover a collective memory where all peoples feel identified. To do this, he represents historical facts, geography, local mythology and characters, such as indigenous heroes, presidents and poets. It is a journey from the origins, through the pre-Hispanic past, the conquest, the creation of a Republic State until the present day and modernity.

Muralism was one of the most significant aesthetic and cultural productions in America, with living its splendour during the 20th century. The revival happening in Chile as well as in other Ibero-American countries aims to bring the art back to the masses, attempting, as always, to eliminate the elitist nature that has characterised it.

According to the Mapuche mythology and Toral’s words:

“The world was created and destroyed by two snakes: MaiMai and TenTen. The head of God Pillan, God of Volcanoes and of Fire, observes. He is a benevolent God that protects humanity (…) A stone figure represents the Mapuche warrior, war being the noblest activity of the race. He has a representation of a bludgeon, a bone or stone object, symbol of the investiture of the Toqui or the chief. There are scenes of daily life, bodies in a river, cacti, shells”.