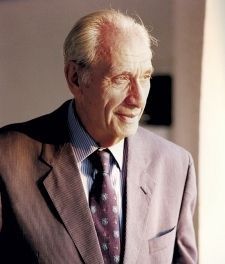 Was born into a Jewish family of Italian and Spanish descent in Thessaloniki (Greece) in 1919.

In 1937, after finishing his studies, he started working at the Israel Discount Bank, a modest bank founded by his father in the city of Tel Aviv. Upon the death of his father, Recanati inherited its management and turned it into the country’s second largest bank. New branches were opened and further private banks were acquired, extending over 22 countries. In 1962, Israel Discount Bank acquired Ralli Brothers Ltd. of London, the name under which the Museums would later be known.

A banker with a passion for the arts

Passionate about music, history and art, Harry Recanati became immersed in the world of collecting. At the beginning he started to acquire European art from the 16th, 17th and 18th centuries, before his interest turned to contemporary art.

This new facet of his private collection began with the work of European artists, as well as those from other continents who he knew thanks to his frequent work trips and his tireless enthusiasm for art. His frequent visits to Latin America led him to discover the local art, leaving him deeply impressed by its quality, temperance and colour. His recently discovered passion for the art of this continent meant that work by Latin American artists was to be worthy of a special place in his private collection.

The culmination of a dream

In the 80s he decided to suspend his activities in the banking sector and dedicate himself exclusively to a large-scale cultural project. Harry Recanati had a dream: to offer his art collection for free to everyone who wished to see it, creating five museums all over the world. The first museum was founded in Punta del Este (Uruguay) in 1988, the second in Santiago (Chile) in 1992, the third in Caesarea (Israel) in 1993, the fourth in Marbella (Spain) in 2000, and a fifth museum, also in Caesarea, in 2007.

The first four Ralli Museums he founded exhibit works from the Contemporary Art Collection. Only the last Museum to be founded, one located in Israel, displays the Collection of works with biblical themes created by European artists from the 16th to 18th centuries, with which Harry Recanati began his journey in the world of art.

Harry Recanati Foundation, the continuation of his legacy

In 2000 the non-profit Harry Recanati Foundation was founded to continue with the work that he had already started, with the main purpose being to promote and disseminate Latin American and European contemporary art with this Collection, making it available to everyone for free.

Harry Recanati, patron and founder of the Ralli Museums, devoted much of his life to promoting and supporting art and artists, both new and well-established.

Get to know us

The Marbella Ralli Museum is part of an international museum institution with four other sites. Find out more about them here.
Get to know us

The Marbella Ralli Museum is part of an international museum institution with four other sites. Find out more about them here.
Permanent collection