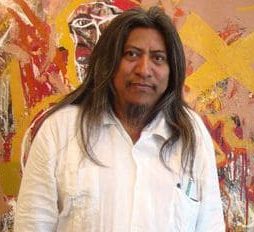 He was born in 1964 in a small town called Teococuilco de Marcos Pérez in the Zapotec Sierra Norte. When he was just nine years old, he migrated with his family to the city of Oaxaca in search of better opportunities for his education, training there in the plastic arts.

He studied at the School of Fine Arts at Benito Juárez Autonomous University of Oaxaca and the Rufino Tamayo Workshop, where he was to deepen his training in graphic arts and realise his potential. In 1963 he moved to Mexico to continue his studies at the National School of Plastic Arts.

He held his first solo exhibition in 1985 at the Sol y Luna gallery, as a result of which three of his works were acquired by the Rockefeller Foundation. In 1989 he was awarded a scholarship for an exchange programme that allowed him to travel to the United States. He took advantage of this opportunity to travel and establish contacts in North America’s major cities.

His work reached Europe a few years later, thanks to his presence at the group exhibition Europalia 93 in Brussels. From then on French galleries showed their interest in him by inviting him to exhibit in the country, resulting in him moving to the French capital where he lived for two years. He eventually returned to Oaxaca de Juárez, where he established his studio.

Migration was to mark his life both in terms of his own experiences and of those of the people around him. Upon re-establishing himself in Oaxaca, he discovered that his home community, Teococuilco de Marcos Pérez, had been adversely affected by outward migration. From that moment on, Alejandro Santiago’s efforts were also aimed at recovering his home town and turning it into a prosperous place with future prospects to counteract depopulation. His approach was to develop art projects, such as his famous installation “2501 Migrantes”, and cultural projects, such as the creation of the La Telaraña and La Calera sculpture centres, along with the creation of an artistic scholarship programme for young people.

Alejandro Santiago painted, sculpted, and worked with silver and engraving. In all of these disciplines his language is characterised by expressiveness and gesture, the line having more importance than the mark, with non-realistic representations, but without moving away from figuration.

His work focuses on social issues that are of concern today in Mexico, such as migration, the role of women in society, and the Zapotec cultural heritage.