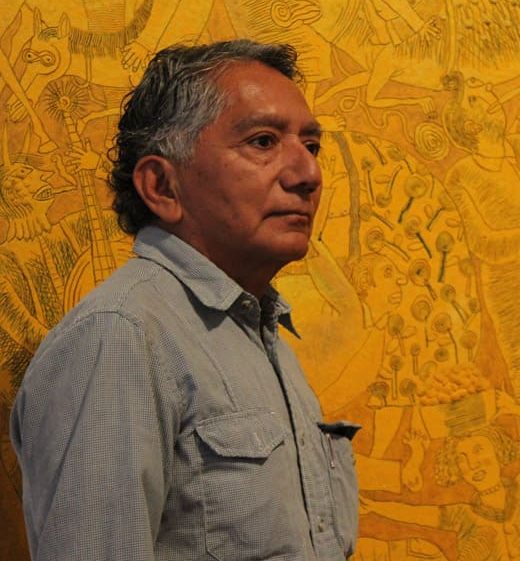 Maximino Javier was born in Valle Nacional, Oaxaca, in 1948. He began his artistic career as a self-taught artist, although he later completed his studies at the Oaxaca School of Fine Arts. He was one of the founding members of the Rufino Tamayo Plastic Arts Workshop.

He is acclaimed for his experience and mastery of various techniques such as engraving, oils, bronze sculpture and ceramics. His interest in enriching his artistic vocabulary has led him to constantly travel to learn about the work of other artists, which is reflected in the evolution of his work. He experiments with textures and colour, looking for new media to add to his language.

His work reflects Latin American traditions, representing landscapes and local characters, where we see recurring motifs such as the countryside and music. His themes revolve around the relationship of humans with nature and with themselves, ranging from legends to ordinary people. Sometimes he depicts scenes taken from traditional culture, whilst in others the artist simply freely interprets stories from Latin American culture, creating his own symbolic imagery.

Since 1978 he has held multiple exhibitions both in Oaxaca and other Mexican cities, as well as in France, Spain and the United States.