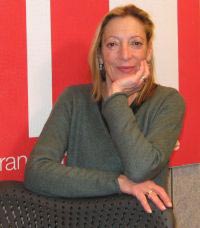 Marta Gaspar was born in the Argentine city of Rosario in 1938, where she started painting at a very young age. She moved to Europe in the mid-seventies and resides there to this day.

Her work, with a naïf aesthetic, focuses on depictions of women. Women or girls are surrounded by sublime real or imaginary natural settings. She also places her figures on decontextualised backgrounds based on spots of colour, which is typical of neo-figuration but also surrealism.

Both natural spaces and coloured backgrounds imbue Marta Gaspar’s work with a dreamlike aesthetic that falls somewhere between imagination and dreams. Her representation of fantastic characters, some of which are semi-human, and way in which she paints place her within the genre of magic realism.

Gaspar has twice won the Buenos Aires Museum of Modern Art’s Georges Braque Prize and has exhibited her work in Paris, New York and Geneva, amongst other cities.