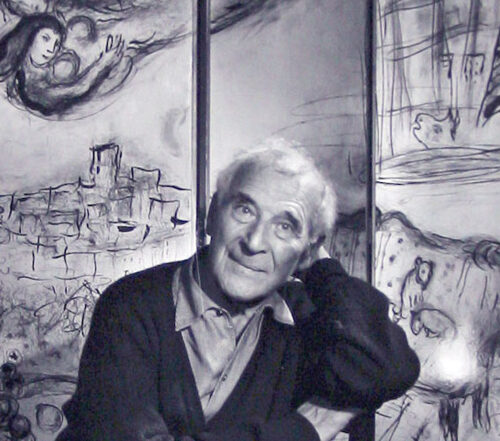 Marc Chagall was born in the small Russian village of Vitebsk in 1887, but his artistic interests took him to France, where he settled in 1910. He embraced artistic currents like Fauvism, Cubism and Orphism, from which he developed a personal style closely linked to his life experiences, his origins, and the fact he was Jewish.

He was never affiliated with any avant-garde movement, in spite of Bretón’s insistence that he join the Surrealists, although he did feel an affinity for certain movements that would influence him in different ways throughout his career.

In 1914, four years after arriving in France, he returned to Russia and took part in the cultural renewal of his country. However his disputes with Malevich and revolutionary demands to combine his political commitment and artistic work took him to Germany in 1924, from where he first left for France and then the United States, a country to which he returned upon the end of World War II.

Chagall created his own reduced iconographic repertoire to which he was to remain faithful throughout his artistic career. His painting merges personal memories with popular Russian folklore, creating representations that lie between fantasy and reality, full of symbols and allegories through which he expresses his inner world.

His themes are family, his country of origin, peasant life in Russia, youthful dreams, rites and Jewish traditions. He returns to them over and over again, reworking them to delve into his own intimate and sentimental world with his unique style.

Thanks to his symbolic use of the images he employs, Marc Chagall’s works can be deciphered as if they were a language. Common elements in his depictions such as the cow, the violin, the priest, flying figures, chickens, and flowers make direct reference to themes from his past and present. Everything related to the Hebrew tradition takes us back to his childhood and tells us about his longing for it. He also uses floating figures to represent moods like love and joy.