He was born in Buenos Aires in 1910, the son of Galician emigrants. When he was 6 years old, they travelled to Spain to settle in A Coruña. Later Luis Seoane moved to Santiago de Compostela to finish high school and study Law at the University, finishing his studies in 1932. During that time he got to know rural Galicia thanks to his summer vacations spent in the small village of Arca, and thanks to his cousin María Elvira Fernández, better known as Maruja Seoane, who he married many years later while in exile.

Involved in intellectual and political movements since his youth, he transferred these concerns onto his artistic side working as a draftsman and illustrator while living in Santiago.

In 1936, due to the Spanish Civil War, Seoane went into exile in his hometown, Buenos Aires. He continued to participate in intellectual circles, in political and social movements, and promoting all kinds of cultural activities, be it founding magazines, publishers, or by exhibitions and radio programmes. Seoane was a crucial part of the circle of Galician exiles in Argentina, coinciding with visual artists such as Castelao, Maruja Mallo and Manuel Colmeiro, along with other intellectuals, poets and writers, such as Lorenzo Varela.

Outstanding and recognized in the publishing field, both for his role as an illustrator and for that of writer and editor, Seoane continues to experiment and work, further developing his plasticity. His paintings, both his mural work and his oil paintings, as well as his technical experimentation with engraving, place him as one of the greatest innovators in terms of aesthetic proposals from one continent and the other.

As for his paintings, Seoane did not start working on an easel until 1944, with the visit he made to the workshop of Joaquín Torres García, one of his greatest influences in visual art, being decisive in this change. Other great names such as Fernand Leger, Pablo Picasso, Henri Matisse and Paul Klee also had a big influence on him, as did the rest of the avant-garde and artistic proposals that he encountered on his return trip to Europe, specifically in France and England, in 1949. Fauvism, cubism, expressionism, are styles that can be glimpsed in his work, more in relation to the essence of these movements than their actual shapes. This trip was a turning point in terms of the formal aspects of his work, from which colour and line become autonomous elements. 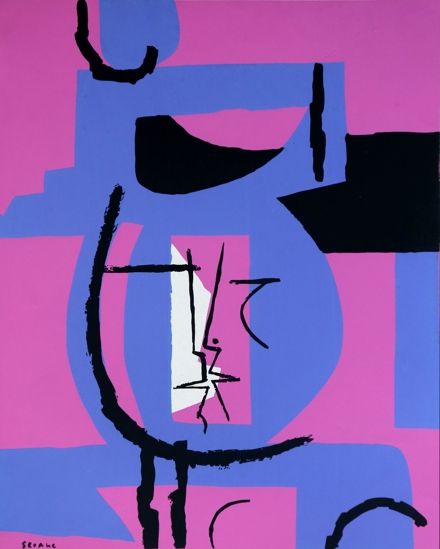 The works of art exhibited show this evolution of his style: figurative and schematic works, where patches of flat and vivid colours shape the volumes, while the black strokes give structure and definition to the composition. During the 60s Seoane develops synthesis until it was almost abstract to later abandon geometrical schematism in favour of more organic shapes.

Galicia is the epicentre of his work, despite the fact that his artistic development takes place thousands of kilometres away. Alongside it, the human figure, especially the female figure, takes centre stage. Within the theme of female figures, those who are represented in a passive, resting or waiting mode prevail, whether portraits or the whole body, situated outdoors, by the sea. With this theme he refers to the mothers, wives, sisters and daughters of those who fought in the Spanish Civil War or who emigrated, whom they expect to see return, as he expected Galicia to see him return.

Throughout his artistic career, the repetition of feminine motifs serves to capture his own experimental, visual and linguistic development to which we referred earlier. And thanks to this repetition, we can see the variety of languages developed by the artist.

This website uses cookies to improve your experience while you navigate through the website. Out of these, the cookies that are categorized as necessary are stored on your browser as they are essential for the working of basic functionalities of the website. We also use third-party cookies that help us analyze and understand how you use this website. These cookies will be stored in your browser only with your consent. You also have the option to opt-out of these cookies. But opting out of some of these cookies may affect your browsing experience.
Necessary Siempre activado
Necessary cookies are absolutely essential for the website to function properly. These cookies ensure basic functionalities and security features of the website, anonymously.
Functional
Functional cookies help to perform certain functionalities like sharing the content of the website on social media platforms, collect feedbacks, and other third-party features.
Performance
Performance cookies are used to understand and analyze the key performance indexes of the website which helps in delivering a better user experience for the visitors.
Analytics
Analytical cookies are used to understand how visitors interact with the website. These cookies help provide information on metrics the number of visitors, bounce rate, traffic source, etc.
Advertisement
Advertisement cookies are used to provide visitors with relevant ads and marketing campaigns. These cookies track visitors across websites and collect information to provide customized ads.
Others
Other uncategorized cookies are those that are being analyzed and have not been classified into a category as yet.
GUARDAR Y ACEPTAR