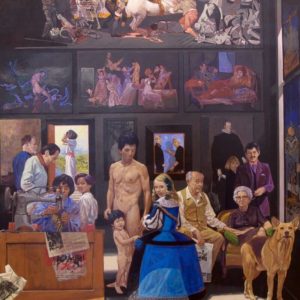 Peruvian artist with strong links to European art and painting. His work is removed from contemporary Peruvian artistic production, but not from its themes. His artistic language, which some have described as hyperrealist, transcends reality, but in a different sense as his painting is replete with symbols.

He has lived and painted in France since 1978 and occupies a prominent position in the New Figuration group.

Braun-Vega’s artistic production is marked by different stages of influence in which there are notable allusions or references to specific artists. His artworks also stand out for their social and political criticism with constant references to the situation in Latin America, miscegenation and the wealthy ruling classes, as well as everyday life.

Worthy of a special mention is the so-called “North-South” theme in his work, which began in 1891 and continues to this day. Here he reflects on cultural relationships and different periods by contrasting the masters of classical European painting with the Latin American reality of the time when the painting takes shape.

Technical, historical, artistic and cultural miscegenation is the dominant thread throughout his oeuvre, of which his painting La Familia Informal is the maximum expression. This triptych is part of the series “PERU/SPAIN, Memorias al desnudo”, created for the 1992 exhibition at the former Museum of Contemporary Art in Madrid. It deals with syncretism and ethnic and artistic cultural miscegenation.

Cultural miscegenation allows the artist to combine elements from different periods and cultures freely with different artistic techniques and languages. The only matter of concern to the artist throughout this process of miscegenation is aesthetic unity and the coherence of the end result. Here, therefore, we see a series of historical and artistic references from different periods alongside everyday characters and situations.

In this triptych, both the work and the title make a clear reference to Las Meninas by Velázquez. With the “Informal” family, Braun-Vega is referring to the informal economy of underdeveloped countries: a family system that ranges from relatives to domestic servants who do not pay taxes. “Informal” is also the way in which defenders of racial purity look upon miscegenation, although this idea would seem impossible after five centuries of ethnic, cultural and religious miscegenation. For Braun-Vega, the entire American continent, both north and south, is today the result of all the mixing and blending that has taken place, giving us the society we have today.

These are not the only references we come across; like a cartoon or a comic strip, images come about and are interwoven. Some of them have had their moment and speak to us of this time and of the present, while others are current. We find an accumulation of images that, in the way that symbols do, allow us to reveal the work’s final message. No element is put in place randomly; no reference is in vain.